BE OBEDIENT TO MONS. HOSER

BE OBEDIENT TO MONS. HOSER 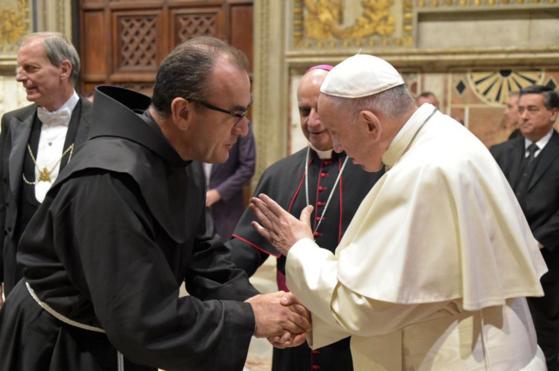 Siate obedienti al mons. Hoser» (Be obedient to Mons. Hoser), these is what the Holy Father Francis told me after I told him I was the parish priest from Medjugorje and that Mons. Hoser was sending his regards to him.

This was the unforgettable encounter and it took place on Thursday, November 29, in Sala Regia of the Apostolic Court in Vatican at 12.15, at the end of the International Convention of the Rectors and Pastoral Workers of Shrines, held from November 27-29. 2018. The Convention was organised by the Pontifical Council for Promoting the New Evangelisation, with the theme – “The Shrine: an open door to the new evangelisation”, presided over by Archbishop Rino Fisichella, President of this Pontifical Council. The last event was to be the audience with the Holy Father for our group of more than 600 persons. Mons. Fisichella told us earlier that it would be impossible for the Holy Father to shake hands with each one of us, so there were representatives chosen to do so on behalf of each one of us. Surely, we all longed for meeting the Holy Father, but considered the opportunity to see him a great gift.

We were told not to come to the Square of St. Peter at the same time, but rather in smaller groups from 8 to 9.30, so the crowd would be avoided. However, each of us 600 showed up at the same time – 8 am! Naturally, we all wanted to be as close as possible to the Holy Father. We passed the security points and waited under the huge steps leading inside the Vatican to be escorted to Sala Regia. We were passing in the groups of a dozen and once we stepped in, we were all impressed by the beauty of the paintings drawn by Michelangelo. It was magnificent.

Mons. Fisichella greeted us and then the representatives of the major world shrines who spoke each for 10 minutes and introduced us to the main elements of their work, particularly with the youth. We heard the testimonies from Lourdes, Fatima, Guadalupe and Holy Land, but also from South Korea and some other parts of the world.

Exactly according to the programme, Holy Father showed up at 11.30 am and we all stood up once our Shepherd in white stepped in. We were so thrilled and greeted him with the huge applause. Mons. Fisichella on behalf of all, greeted the Holly Father, and thanked him for the initiative to organise this Convention and introduced him to the work that was done. Holy Father then spoke and emphasised the role of the shrine for the new evangelisation and encouraged us to do this with more fervour. He told us we all needed to have the open hearts and to welcome all pilgrims who come to our shrines.

When the Holy Father finished, the representatives came to greet him and he was to continue his programme and leave this Hall, but something unexpected took place, he said that he wanted to personally greet each 600 of us! We were all so thrilled and happy about this!

Slowly, different people were coming close to him and were joyfully leaving the Hall after meeting with the Holy Father. As my turn was there, I thought about what to give to the Holy Father. I came from Medjugorje with the intention, that if the encounter takes place, I would give him rosary beads, prayer book and a report with the most important things regarding Medjugorje.

All of that was packed up in my bag, but I decided for the rosary beads made from our Herzegovinian thorns, I took it and moved closer to the Holy Father.

I could see that those in front of me were not talking to him, only shaking hands, I realised that I need to introduce myself in only few words. When I came close, I shook hands with him and I gave him rosary beads and said in Italian very quickly: “Parish priest from Medjugorje, Mons. Hoser sends his regards!”

Once the Holy Father heard this, he kept my hands in his, paused for a few moments and then said: “Be obedient to Mons. Hoser.” I smiled at him as he was saying this and I really do not know how excited I was in those moments, perhaps the Holy Father could feel my joy for this encounter, so he repeated these words once again: “Be obedient to Mons. Hoser.” Then he said: “Yes?”, as if he wanted to double check whether I understood seriously enough what he wanted to say to me. I said: “Yes, yes!”, and as he held the rosary he asked me: “Is this for me?”, I told him: “Yes, it is for you!”. He thanked me and someone standing next to him escorted me to step aside and give room to the others.

I left Sala Regia jumping of joy and I could not believe what happened to me. I walked along the St. Peter’s Square, but I could not see anything, as I reflected all the time on what had just happened before. I tried to reconstruct every moment I spent with the Holy Father, every one of his words and gestures, wondering what did he want to say to me in those few words.

My impression was that he wanted to send the message to me, to all Franciscans serving here, to all the parishioners and pilgrims, a message that was given in warm, fatherly, yet serious words from his heart. It was obvious those few words were not there out of courtesy, but I felt he really cared and wanted to send an important message to each one of us. This is what I realised as I reflected on this encounter, remembering the special attention he had as he said these words. My conclusion was that he repeated that sentence thinking that I did not hear him or understood him well and he really cared for me to remember that and to bring it to Medjugorje.